Your Source For Entertainment

As a contributor and producer for IHeart Radio you can stay tuned right here for the latest celebrity news!

Usher and Grace Miguel Separate After Two Years of Marriage

Drake’s old lyric notebook from his “DeGrassi” TV days is up for sale. Apparently, the same company that’s known for selling Tupac memorabilia has a copy of Drake’s 2002 journal. The 12-page notebook also contains handwritten notes, an homage to Biggie’s "Ten Crack Commandments" which he titled "10 Mack Commandments,” and multiple autographs using his real name, Aubrey Graham. The book was recovered 10 years ago at Drake’s grandfather’s furniture factory in Toronto. Now, you

Ming Lee Simmons’ family playfully trolled her after she posted a bikini snap in the snow on The ‘Gram. Her pops, Russell Simmons, commented, “Hi princess, why are you in a swimsuit in the snow. Get your butt inside [heart emoji].” However, the best roast came from her little sister, Aoki Lee Simmons. Her comment was, “T’challa did not save Wakanda and empower Black women everyone for you to do this mess. #wakandaforever.” While it’s no fun when a family feuds, this and the “

Chance the Rapper chose a side in the Mo’nique vs. Netflix beef. He’s standing with Mo. Ironically Chance voiced his support after the comedienne appeared on the Breakfast Club to confront Charlemagne The God aka LeNard about being Donkey of the Day. As you recall, she famously asked fans to boycott Netflix for “gender and racial bias.” Which this move prompted Charlemagne to give her that title. Most of us reacted like, WTF – boycott? Plus I already cancelled cable now I ha

Wendy Williams never misses a chance to throw shade and say it like she means it. This time she even came for Beyoncé. During her “Hot Topics” segment, Wendy mentioned Fergie’s struggle rendition of the national anthem at the NBA All-Star games. The talk show host declared, "There are only a few people who can sing raw dog and Fergie is not one, she needs auto-tune. Jennifer Lopez needs auto-tune, Janet [Jackson] needs auto-tune, Beyoncé needs auto-tune.” The audience quickly

Tyler Perry Says "Black Panther" Was Shot At His Studio

If you’re still planning to move to Wakanda, you won’t have to go far since it’s in Atlanta. Tyler Perry revealed “Black Panther” was shot at his studio in Georgia. The mogul shared the news on The ‘Gram in honor of Black History Month and to celebrate the film huge success. Tyler posted an image of his compound with the caption, “Welcome to Wakanda! You wanna talk about Black History! These are the new stages at Tyler Perry Studios. And guess what the first film to shoot o 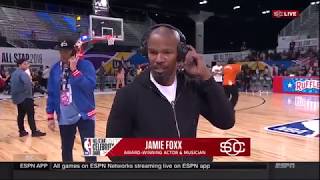 Jamie Foxx made funny a Black History Month joke that could explain why he walked away from a recent ESPN interview. TMZ spotted the comedian leaving an event alone, and before driving off in his Rezvani Tank, Jamie rolled down the window and jokingly announced, “It’s Black History Month, no White girls till March 1st.” Mhmm...Well, that's interesting since the day before his TMZ run in the “Django Unchained” star walked off mid-interview when ESPN anchor Michael Smith asked

Fergie caught hella flack for butchering national anthem during the NBA All-Star game, however she has one supporter in her corner ­– Mariah Carey. The pop diva is definitely not a stranger to getting dragged on social for struggle performances. We all remember her 2016/2017 New Year Eve act. Well, TMZ caught up with Mimi and she shared to some sound advice, which is basically... ignore the haters. While leaving a restaurant in Hollywood with her boyfriend Bryan Tanaka she wa

Offset Says Cardi B Is Not Pregnant

Cardi B’s fiancé is shutting down pregnancy rumors. In case you missed it, a member of Cardi’s team has reportedly been telling people she's three to four months pregnant. Well, TMZ caught up with Offset while shopping in LA and asked if was excited about becoming a father, which he replied “I’m already a father of three. My kids two, two and eight. I don’t know what the hell you talking about.” And when pressed again to confirm if rumor report was true the Migo member blunt

JB Smoove "Wishes" He Could Be On "This Is Us"

TMZ caught up JB Smoove at the airport and asked his thoughts on Stacey Dash wanting to run for congress - yup the sunken one recently shared on Twitter her latest career idea. But, JB dodged that question and said he was too busy binge-watching the NBC hit series, "This is Us." Instead, the comedian playfully pitched which roles he'd like to play if the show wanted to add him to the cast. According to the "Real Husband of Hollywood" actor, he "wishes" he could be on the show